A tribute to one of Hemingway’s favorite pursuits, discovered in Key West: sport fishing.

A snapshot of Hemingway’s writing room above the carriage house (and the iron grate that protects the room from wayward tourists). 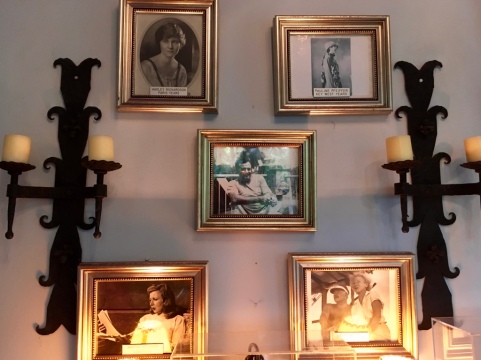 A wall o’ the four wives. A somewhat unsettling group of portraits, perhaps.

Another shot of Hemingway’s writing getaway. Note to nods to his passions: writing, books, fishing, and big game hunting.

I’m a sucker for this sun-licked wrap-around porch.

A few pieces of Hemingway’s private library. Most of his books reside in Cuba.

A tribute to Hemingway’s love for big game hunting.

Hemingway’s bed, custom-made to accommodate his large size. The headboard is an antique Spanish gate.

Hubby and me, proving we were there. 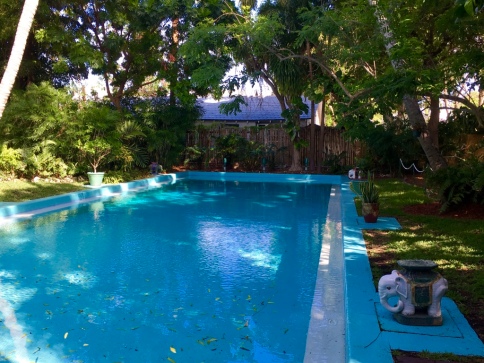 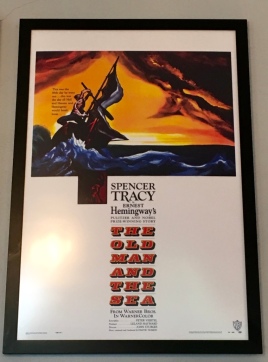 Note the base of this fountain: a urinal Hemingway acquired from a local Key West bar. 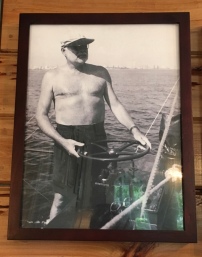 Hemingway at the helm.

Love these posters for the movie adaptations of Hemingway’s novels.

As always, a nod to Hemingway house’s horde of feline residents.

Stairs up to Hemingway’s writing hideaway.

A treatise on the Iceberg Theory. 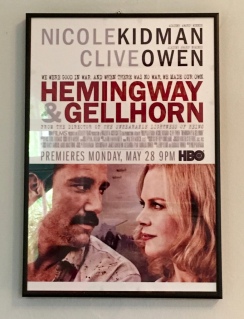 Hemingway’s house is famous for its polydactyl cats. Not all of the approximately 50 cats now resident there have manifested this gene, but all are carriers.

“The Snows of Kilimanjaro,” one of the stories inspired by Hemingway’s hunting expeditions.

A snapshot of Hemingway’s house, way back when.

Hemingway’s home was one of the first in the Florida Keys to have running water.

In my last post, I mentioned that I was recently in Key West, soaking up the sea and much longed-for time with family. I got to swim in turquoise waters, stuff myself silly with seafood, and wander streets lined with tropical trees and homes that, to my untrained eye, blended the beach architecture of my childhood with southern-Victorian and Spanish styles.

But of course, no writer’s visit to Key West would be complete without a stop at one house in particular: The Hemingway Home and Museum.

I’m always a bit embarrassed to admit this–after all, I have a Masters in English and American literature–but I haven’t actually read all that much Hemingway. I did read his “Hills like White Elephants,” a short story that exemplifies Hemingway’s Iceberg Theory (the concept of writing around a particular subject–here abortion–without ever explicitly naming it). But my research emphasis in my degree was Romantic, Victorian, and Post-Colonial British literature, and Early American and 19th-century literature. Chronologically-speaking, Hemingway came a little too late for me.

But a few years ago, I picked up Paula McLain’s historical, Hemingway-themed novel, The Paris Wife. Obviously, this book is A) fiction (and therefore, a not-necessarily-rigidly-factual interpretation of history) and B) more focused on Hemingway’s first wife, Hadley Richardson, than Hemingway himself.

END_OF_DOCUMENT_TOKEN_TO_BE_REPLACED

This series started with an (intimidating) commission to paint a “perfect surfable wave on another planet”. I wasn’t sure how that first piece would go. But I had the BEST time working on it, as it let me go nuts with colors and ideas. And then I couldn’t stop! So here we are, three paintings later: no.1, titled THE FOURTH COAST; no.2, WHEN WORLDS COLLIDE, no.3, title pending. Confession: I think no.2 might be my fav...
Finished at last: number 3 in my space/surf watercolor series! It’s been quite a treat, working with all these vibrant shades of permanent rose and phthalo green. I suspect I’ll be finding my way back to this color scheme sometime soon!
Coming right along on space/surf painting no.3. One of my very favorite steps of the process: scrubbing off all that masking fluid! Once the yellow goop is gone, I feel like I’ve entered the final-coming-together-phase! 🌊💚✨
Very excited that my original painting CURIOSITY has found a home with an especially lovely client! (Prints are still available: Etsy.com/shop/lmpeltierdesigns.) Now to get him all wrapped up and ready to go. My weapons of choice: clear waterproof/protective sleeve, backer board, stiff mailer envelope, fun gift wrap, fragile stickers, beaucoup packing tape, and, of course, a thank you note. I LOVE it when my pieces find a happy home. 💕 But does anyone else out there feel the teeniest bit bittersweet, sending their originals out into the world?
Getting a bit more done every day! My Winsor & Newton Series 7, size 6 brush proved a fun tool for giving my emerald wave some texture-y movement lines. 💚🌊🎨
Obviously still a looooong way to go on this new project. But I’m already really excited about the colors! Can’t get enough of that phthalo green! 💚