As I mentioned in my post on romance in fiction, I’ve been on a bit of a love kick lately. So it seems appropriate that the stars would align to allow me to attend a wedding this weekend.

As you may guess, I didn’t spontaneously make the 13-hour-by-plane commute back to the States to attend nuptials. (Though I would happily kiss the feet of anyone who invented a working Harry-Potter-esque Portkey, thus preventing us from ever missing another wedding, graduation, etc., due to long distance.) Instead, this was the wedding (hūn lǐ) of one of my Chinese co-workers. His is actually the second Chinese wedding I’ve attended in our 1.5 years of living in China. In both cases, I’ve been grateful for the opportunity to attend. It’s poignant thing, witnessing that  incredible moment in someone’s life. And a Chinese wedding provides the added allure of a glimpse inside the culture.

Here are a few Chinese wedding survival tips (should you ever find yourself in need) that I’ve picked up along the way:

On to the wedding itself. I’ve heard that more and more Chinese couples are electing to have a western-style wedding, eschewing more traditional Chinese elements. But having attended two Chinese weddings, I must say: I think that’s oversimplifying things.

The first wedding we attended was consciously kept traditional. Desperately, I wish I’d taken pictures (curse your inability to hold my iPhone, tiny formal clutch!) because the venue was dazzling, luxurious with red lanterns, red banners, red flowers, and red table decor. This crimson-centric decorating scheme would never be seen at a traditional western wedding, but it was enchanting in its visual richness. The bride wore two red ensembles: one very traditional for the ceremony, and for the reception, a beautiful qí páo, that iconic, high-collared Chinese gown made popular in the early-to-mid 20th century.

Today’s wedding was nearer western on the continuum between traditional Chinese and modern American. The bride wore a white ball gown for the ceremony (changing into a sleek red dress for the reception). She carried a bouquet. The decor was softer–white  and pale green and pink, with elements of crystal and roses.

But that’s where the similarities stopped. When the lights went down on the ballroom where the ceremony was held, things took a rave-party turn. There was purple, club-style lighting. Piercingly bright spotlights on the bride and groom. Strobe lights at dramatic moments in the ceremony. Booming speakers. Instead of a somber pastor or judge, there was a man booming into the microphone à la sports-announcer. (As the ceremony was entirely in Mandarin, I caught one word in a 100, but he seemed to be telling some dramatized story about the couple. (How they met? Their future together?) Regardless, he told it LOUDLY… by which I mean I felt the speaker vibrating in my chest.

The groom presented the bouquet to the bride. Walked her down the “aisle”…which was really an elevated catwalk. The groomsmen’s and bridesmaids’ speeches were part of the ceremony. So was the bouquet toss, which saw the winning girl wiping out on the catwalk, legs flying up in the air. In general, there was a sense of performance to the wedding, of trying to make it a choreographed show… but also a sense of confused chaos, as the wedding party giggled, scrabbling for the next step.

These were but a few of the differences which made this wedding distinctly Chinese, despite the bride’s wearing white. But my favorite difference was this: the way the bride’s and groom’s parents were incorporated into the ceremony.

About half-way through, both sets of parents were seated onstage. The couple then took turns serving each parent tea. The bride served her father, then her mother. The groom did the same with his parents.

This was a simple, brief part of the ceremony, but there was something lovely in it. In western tradition, the father gives his daughter away. The parents are escorted in and given prime seating near the front. Some people elect to have a unity candle as a means of incorporating parents.

But something about the Chinese ceremony, with the couple bending to serve tea to their seated parents told a more poignant story: We acknowledge that you have served us, in raising us. We honor that sacrifice, we thank you, by serving you today.We promise to serve you in the future.

It was a beautiful means of depicting this: though a wedding marks the instant your spouse becomes the most significant person in your life, he/she is by no means the only significant person. Love is intimate, but it is not isolated.

That truth is one that crosses all cultural borders. Even if strobe lighting is less likely to take off internationally.

Exhibit A: The glaring spotlights for the bride and groom. 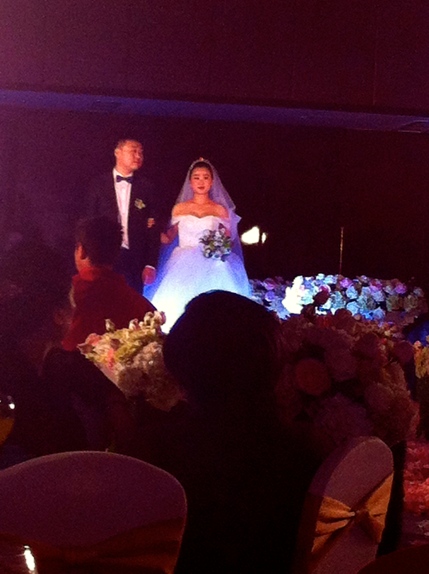 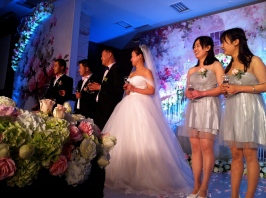 So the husband and I are preparing to move. Which is one of my LEAST FAVORITE activities of all time, since we do it every 1-3 years for work. But this new spot does come with one major consolation prize: a gorgeous sunroom that I’m stealing for my painting studio. Hip-hip-hooray! 🎨💕
Always fun: client photos! I love getting to see my paintings find a place in someone’s home. 🖼💕
A copywriting project has me a bit sidetracked these days, but I’m still squeezing in time here and there to work on the latest painting in my space-y surfscape series.
I was super blessed to sneak away last weekend to the family ranch in Texas. A bonus: the chance to snap a few inspiration photos for future paintings!
Here’s to getting those base colors laid down for the wave! 🌊 🎨 ✨
So... I know it’s totally bad form to go shopping for yourself right after Christmas. But after picking up two new books, three new paints (Daniel Smith’s iridescent copper, iridescent sunstone, and zoisite genuine), and new hot press Arches watercolor paper, I’m having a hard time being anything but jazzed! Major points to the husband who tagged along so patiently on this haul!