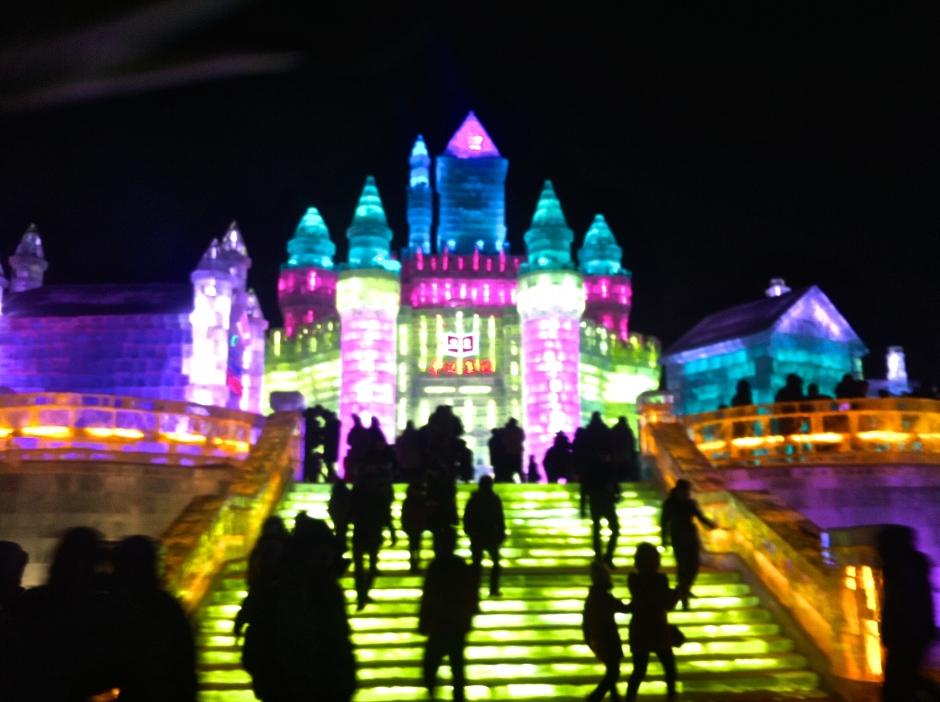 In addition to introducing the upcoming year, Chinese New Year also marks the official start of spring according to China’s lunar calendar.

This year, I owe the lunar calendar a big commendation, as it pegged spring’s arrival perfectly. Just two weeks ago, temperatures here were in the 40s and 50s. Following on the heels of February 8th’s New Year celebration, the cherry blossoms are blooming and I’m shedding my jacket, happily welcoming 75°F days.

But the sunny days have made me nostalgic, bringing to a close our last winter to be spent in China. With the days counting down to the end of our assignment, I’m fondly remembering adventures we’ve taken, even as I wonder how well we’ve availed ourselves of our time here.

Of our many exotic escapades, perhaps the one that stands out most crisply is our trip to Harbin. China is a diverse country, with many an unexpected influence. But Harbin is a particularly unique gem.

Originally founded as a settlement for laborers constructing the Trans-Siberian railroad, Harbin is located on China’s side of her borders with Russia and North Korea. It’s been roughly a century since railway construction concluded, but Russian influence remains strong in Harbin. Architecture there showcases bright colors nowhere to be seen in my Sichuan “home” province, and many a structure is crowned with Russia’s characteristic onion-shaped dome. Shops are packed with Russo-inspired nicknacks, including matryoshka dolls (Russian nesting dolls) in every shape, hue, size, and style. (I couldn’t resist and picked up my own set, feeling slightly weird that my Russian nesting dolls were, in fact, Chinese.)

Our group’s best experience with this unexpected Sino-Russian culture was the authentic Russian restaurant we lucked into for dinner one evening. Run by Alex, a Russian national, his Chinese wife, and their beautiful Russian-Chinese daughter, the place offered all the hearty Russian food (and vodka) a body could desire. Ultimately, it was a dinner-and-show experience; while munching on borscht and cabbage rolls, we enjoyed Alex’s performance of popular American songs, accompanied by electric keyboard and a comedically somber expression.

Truly, there’s no communicating how out-of-body it felt being an American eating Russian cuisine in a town in the remotest reaches of China.

But any overview of Harbin would be incomplete without mention of its three essentials: frigid temperatures, ice festivals, and tigers.

It was in Harbin that I got my picture snapped with a baby tiger, as I mentioned in my write-up on Xi’an’s Terra Cotta Warriors. But that’s a tale for another post.

First and foremost, I must set the stage regarding weather conditions; there’s just no visualizing our Harbin adventure until you know all shenanigans were in the context of the town’s legendarily, literally freezing temperatures. In terms of chill factor, Harbin answers every stereotype you’ve ever held regarding Siberia. Never in my life have I been so cold, and I spent January 2010 living in the Czech Republic. Temperatures hovered around -20°F. My daily wardrobe was two pairs of socks; fur-lined, knee-high snow boots, two pairs of long underwear bottoms; jeans; two long underwear shirts; a wool sweater; a coat rated for sub-zero temperatures; chemical hand warmers; liner gloves; heavy gloves; a scarf; a hat; and a fur-lined jacket hood.

And baffled, absolutely baffled, by all the locals walking around eating ice cream. Ice cream?! Which they’d bought from street vendors who were able to store their ice cream in hollowed out blocks of ice because the air temperature was low enough to prevent any melting. When I bought a stick of sugar-coated fruit from one such street stall, I nearly broke my teeth trying to eat it, because the strawberries were literally frozen through.

Have I mentioned that Harbin’s a bit nippy?

The entire town is made part of the festival. Ice sculptures were dotted throughout the city–rams, to celebrate 2015’s Year of the Ram; fish, for prosperity; a Russian-style skyline. A patch of frozen river was converted for the season into a theme park called Happy Valley, complete with ice maze and dog sledding (though it was a bit tragic to see them using German shepherds and golden retrievers as pity-worthy substitutes for actual sled dogs). There was even the ice-equivalent of kite-sailing.

But of all these winter-wonders, by far the biggest highlight was Harbin’s Ice and Snow World. If ever you’ve imagined yourself stumbling into Santa’s village, the Snow World park may be your best real-life opportunity to replicate the fantasy.

Best seen at night, this wintery playground is one of the few things in adult life that lives up to the description of fantastical. Of magnificent proportion, the park’s ice and snow sculptures tower above visitors. Each one is illuminated by a brilliant array of lights, shimmering through the ice and casting pools of rainbow across the snowy ground. Ice carousel horses large enough to sit on, ice buildings big enough to walk through. Our group scaled stairways made of ice blocks, ascending to an ice battlement from which we surveyed the entire park, monarchs for a moment over our own ice castle. We cuddled snow foxes. We relaxed in an ice lounge, stretching out on couches carved from ice (admittedly, not super comfy). We indulged in a bottle of blueberry wine in an actual igloo, reclining at an ice table as rave-style lights glimmered off every frosty surface.

Elsa, eat your heart out.

Because there’s really no doing the Ice and Snow World justice via verbal description alone, I offer as a supplement my snapshots (though I don’t have as many as I’d like, since my iPhone shut down due to the cold!) But as my parting words, I’ll just say this: should you ever get the chance to make your way to Harbin for a visit, don’t hesitate.

Get on that plane. Go. But don’t forget your mittens! 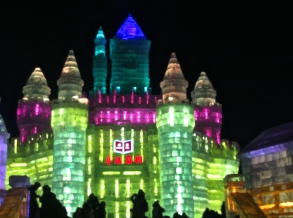 Quick visit to a Russian ice castle, anyone? 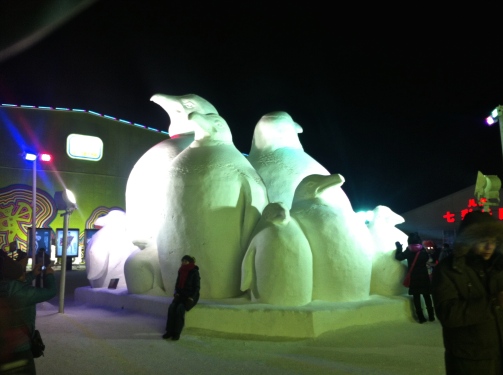 Me, all bundled up in front of the snow castle. 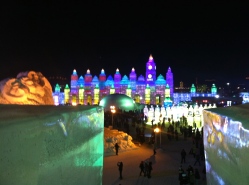 View from the ice castle’s battlement. 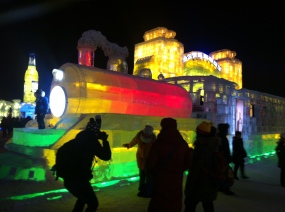 All aboard for the Polar Express! 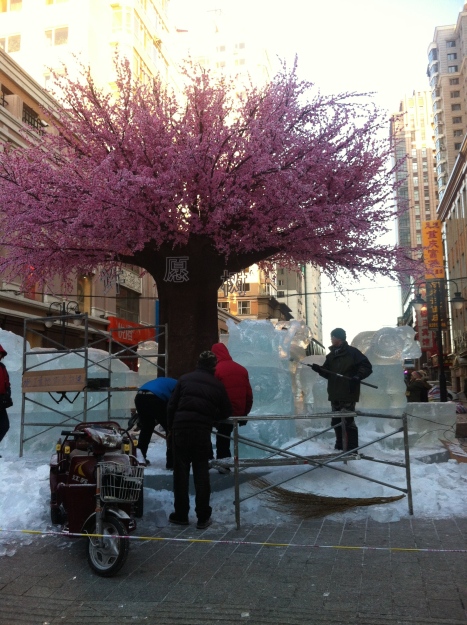 Happy Valley, lit up by a light show.

So the husband and I are preparing to move. Which is one of my LEAST FAVORITE activities of all time, since we do it every 1-3 years for work. But this new spot does come with one major consolation prize: a gorgeous sunroom that I’m stealing for my painting studio. Hip-hip-hooray! 🎨💕
Always fun: client photos! I love getting to see my paintings find a place in someone’s home. 🖼💕
A copywriting project has me a bit sidetracked these days, but I’m still squeezing in time here and there to work on the latest painting in my space-y surfscape series.
I was super blessed to sneak away last weekend to the family ranch in Texas. A bonus: the chance to snap a few inspiration photos for future paintings!
Here’s to getting those base colors laid down for the wave! 🌊 🎨 ✨
So... I know it’s totally bad form to go shopping for yourself right after Christmas. But after picking up two new books, three new paints (Daniel Smith’s iridescent copper, iridescent sunstone, and zoisite genuine), and new hot press Arches watercolor paper, I’m having a hard time being anything but jazzed! Major points to the husband who tagged along so patiently on this haul!